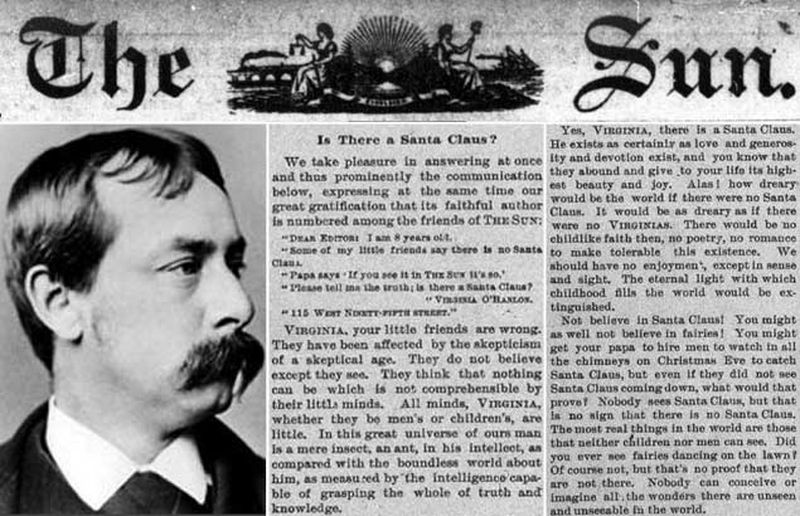 The holidays are coming, which is usually a time to celebrate and be with our families, but as 2020 will have it, that too will be different. Gatherings will be limited, if they happen at all. Many of us are facing loss—whether it’s a loved one, a job, or just a sense of security. It can sometimes feel like we’re stuck in a never-ending slog of uncertainty and dread.

For that reason, I think it’s more important than ever to seek joy and find ways to recapture the “magic” of the holiday season. Thus, I’d like to revisit the true story of Virginia O’Hanlon, an 8-year-old girl who wrote a letter to the New York Sun in 1897 asking whether or not Santa Claus was real.

While the child’s inquiry itself may not be remarkable, the response from the newspaper certainly was. It seemed to capture the “essence” of the Christmas Spirit and created an immediate sensation among its readers. It was so extraordinary that it was reprinted every Christmas for the next 50 years until the newspaper went out of business.

Translated into over 20 languages, the editor’s response has appeared in books, movies, plays, and a variety of other media outlets. Over a century later, it remains the most reprinted editorial ever to run in any newspaper.

The author of the famous response was Francis P. Church, a veteran reporter who had covered the civil war for the New York Times. Having witnessed great suffering and a corresponding lack of hope and faith in many people, Church was inspired to write something that would be truthful, yet that would not dash the dreams of a young girl who still felt the magic of Christmas.

I am 8 years old. Some of my little friends say there is no Santa Claus. Papa says, “If you see it in The Sun, it’s so.” Please tell me the truth, is there a Santa Claus?

VIRGINIA, your little friends are wrong. They have been affected by the skepticism of a skeptical age. They do not believe except [what] they see. They think that nothing can be which is not comprehensible by their little minds. All minds, VIRGINIA, whether they be men’s or children’s, are little. In this great universe of ours, man is a mere insect, an ant in his intellect, as compared with the boundless world about him, as measured by the intelligence capable of grasping the whole of truth and knowledge.

Yes, VIRGINIA, there is a Santa Claus. He exists as certainly as love and generosity and devotion exist, and you know that they abound and give to your life its highest beauty and joy. Alas! How dreary would be the world if there were no Santa Claus? It would be as dreary as if there were no VIRGINIAS. There would be no childlike faith then, no poetry, no romance to make tolerable this existence. We should have no enjoyment, except in sense and sight. The eternal light with which childhood fills the world would be extinguished.

The most real things in the world are those that neither children nor men can see. Did you ever see fairies dancing on the lawn? Of course not, but that’s no proof that they are not there. Nobody can conceive or imagine all the wonders there are unseen and unseeable in the world.

You may tear apart the baby’s rattle and see what makes the noise inside, but there is a veil covering the unseen world which not the strongest man, nor even the united strength of all the strongest men that ever lived, could tear apart. Only faith, fancy, poetry, love, romance, can push aside that curtain and view and picture the supernal [heavenly] beauty and glory beyond. Is it all real? Ah, VIRGINIA, in all this world, there is nothing else real and abiding.

The response from Francis Church strikes a powerful chord because it resonates with a deep truth that we all know in our hearts. He implies that there’s much more to this world than we can pick up with our senses or understand with our minds. Behind the scenes, there’s a higher intelligence at work, a loving energy that permeates the universe.

This energy isn’t tangible but rather hidden from view, as if behind a veil. We have to take it on faith that it exists, but the more we believe in it, the more real it becomes. Santa Claus, as a symbol of love, joy, and generosity, is yet another manifestation of this amazing energy and is thus, equally as real. Instead of confirming or denying a myth, Church gave people a reason to “believe.”

This idea of “believing in something to make it real” reminds me of a scene in my children’s book, Noah and the Magic Dragon…when Noah and his dragon (Flame) first arrive in “Dreamland.”

Noah rubbed his eyes again and again.
He finally stopped, though I don’t know when.
The amazing sights he saw, he couldn’t believe.
“Could it really be real?” he asked, “Or do my eyes deceive?”
“Anything can be real,” said Flame, “so long as you believe.”

Like Francis Church and Flame the Dragon, I have faith in this “Spirit of Joy,” and I can recognize its many forms. It lives in the celebration and fellowship of family and friends at holiday gatherings, even if those gathering can only happen virtually. You feel it when you show kindness to another person, donate to someone in need, delight a child with a gift, or offer prayers of thanksgiving. It can even appear as a truce in the family, when issues and quarrels are temporarily set aside. In all its various disguises, this loving energy is in all of these things. It has the power to pierce through difficult, uncertain times and push aside the veil to offer us a glimpse into our highest beauty and wonderment.

My Passion for Story Telling